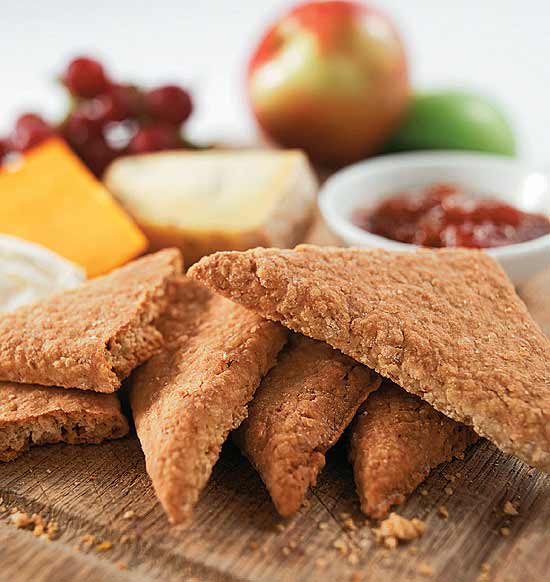 Ditty’s Oatcakes are sold everywhere from Dublin to Dubai these days. A staggering 20,000 of them are made every day at the bakery in Castledawson in County Derry. So what’s so special about them?

The oatcake is undoubtedly one of Ditty’s signature products. It’s made to a 53 year old recipe which Robert Ditty and his nephew Clifford Brimley refuse to compromise on.

“Nothing has changed with the oatcake apart from the marketing” says Robert.

“We use buttermilk which makes them more akin to a digestive (or sweetmeal) biscuit, unlike traditional oatcakes which can be quite dry.

“I’ve seen machines that could quadruple output, but we would have to take 60 per cent of moisture out and we don’t want to do that, so we just use the old recipe and we make them by hand” says Robert.

The oats themselves come from County Armagh.

“For me they work as a product because they can be made in advance, they have a very long shelf life. They’re also very versatile in that we can add ingredients that introduce another part of the island.”

Ireland indeed has a very rich larder, filled with both natural and artisan products. Seaweed grows on every coast, but it’s particularly prized in North Antrim where it’s known as dulse. That’s a winning spike of umami flavour in every bite of his now best-selling oatcake. The Celery and Black Pepper is another winner. Some flavour pairings are more random.

“Two of our most successful combinations; the smoked oatcakes and the Gubbeen cheese ones were both accidents” says Robert.

“I was chatting to Frank Hederman who makes the most fantastic smoked fish in Cork and I was joking to him about smoking oats. He said he’d never tried it but after having a go using a fly screen to put them on, we started using them in our oatcakes.”

They’re happy accidents that have made for some very grateful customers. So what’s next on the flavour front?

Well, there’s a walnut one about to hit the shelves and Robert says he’s trying to get the right recipe for a Bramley Apple one. Oats and apples from the Orchard County sound like a perfect combination. We can’t wait!