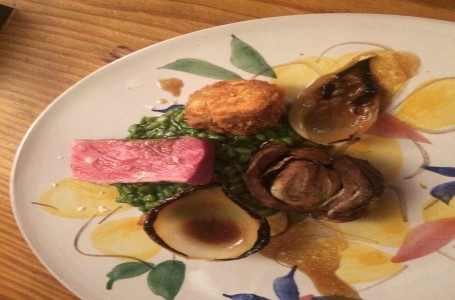 I’m a big fan of pop-up restaurants. Often the food is better than regular services because the chefs can really express themselves with the ingredients. There is no choice so diners have to take a leap of faith too. Both sides are willing to take a risk and try new things. So it was at Nua at the Kitchen in Galway during the recent Food on the Edge conference.

The chefs behind Nua are young bloods Evan O’Ceallaigh and Rob Browne. Read those names again, you’ll definitely be hearing more about them. In their menu they say “Nua is a chance to showcase the world-class produce available in the west of Ireland” and how they want to “push the boundaries of Irish cuisine”.

Their first serve was a selection of snacks including salt cod brandade on a perfect bite of buttered potato, then came nutty, dense “Granny’s brown bread” with a feather-light black pudding mousse.  Both were Lilliput-sized portions but Mammoth-sized in flavour.

Then came a clean, raw scallop with a cabbagey bite of kohlrabi, a rapeseed emulsion and a crunch of crab apple. Unbelievably the creator of this dish is only 19. Evan O’Ceallaigh is at Pierre Koffman’s in London. He popped home to Ireland for the pop-up. I was very glad he did.

Turnip is not a sexy vegetable but salt-bake it, combine it with pear puree, finely-grated goat’s cheese and toasted hazelnut and you have something very seductive indeed. Neither are sardines my favourite fish but these were paired with sweet quince, pickled seaweed and buttermilk. Three bites of pure umami.

A wild mushroom tea was wrap-your-hands-around good. It came in a mug made by renowned Galway potter Judy Greene. It was soothing, savoury penicillin.

The cruibeens (pig’s feet) and colcannon (cabbage and potato mash) were a masterclass in ear to feet eating but the star of the show was the 2 year old sheep with wild mint, nettle porridge and onions. The mutton was from Calvey’s on Achill Island. It grazed on machair grass and heather. It was sea-salty and heather-sweet and nowhere near as strong as I expected. The nettle porridge was McHale Park green and the onions were cut into cup shapes which meant they held their liquid in the centre as a self-made gravy. This was a faultless dish and an example of just how good Irish food is these days.

The dessert was another triumph. Strained sheep’s milk yoghurt from Velvet Cloud in Mayo was served with honey, whisky-soaked berries and nuts. It was like a deconstructed Scottish cranachan. Rob came out of the kitchen with a final treat. It was a spoonful of mutton-fat soft-set fudge. Yes, there was a sheepy tang but it WORKED. All this from two guys, one of whom is taking a year off from Medical School. Ireland’s foodie future is in safe hands.